How would nonprofits fare, on trial? 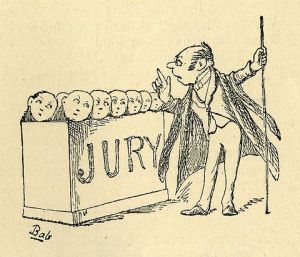 This post from White Courtesy Telephone described a scene at a philanthropy conference a few years ago, when a jury of the field’s peers ‘put philanthropy on trial’.

Prosecution and defense, both from the philanthropy world, presented evidence on either side of these critical questions:

“Was philanthropy, or was it not, underperforming in its quest to help create social change? Should it, or should it not, be convicted for its lackluster outcomes?”

And 10 out of the 12 audience members chosen to deliberate philanthropy’s fate voted to convict.

The post emphasizes that there was little discussion, afterwards, about the significance of that verdict, or about the evidence that jurors, respectively, found most persuasive, or about the criteria that should be used to determine the relative effectiveness of the field.

And, interestingly, there has never been a retrial.

I would encourage you to read the post; nonprofits and nonprofit advocates certainly have an interest in how philanthropists are debating these questions of impact, and how their perception of their progress in this area may speak to the need for changes in how foundations interact with their nonprofit grantees.

But I am wondering how a similar trial would go for our nonprofit social service sector, itself.

Should we be convicted for failing to make significant progress on some of the most pressing social problems of our day? Or should we be excused, given the increasing pressures put on the sector, and the abdication of government, in particular, regarding its responsibilities for the same?

By what criteria would we be gauged to be ‘succeeding’, or not, in our quest for impact?

Are there parts of our sector that would fare differently than others? Are organizations working in health care, for example, doing better than those combating poverty? Is it even possible to dissect our field this way?

Would certain voices in our sector be more critical than others? Has this role of internal critic fallen mostly to particular voices in the field today, or are some actors just positioned so as to make them more or less concerned about nonprofit performance?

How would you vote, as a juror deciding the fate of our sector? What evidence would you present, as a prosecutor or as the defense?

And how would you feel, as a defendant?

What if we were judged not by other nonprofit actors, but by our most important ‘peers’–the clients whose interactions with our organizations give us our legitimacy?

How would they judge your specific organization and the overall field with which they engage?

What might we learn from such an exercise? What do we stand to lose?

This entry was posted in My New Favorite Thing and tagged nonprofit organizations, philanthropy, social change. Bookmark the permalink.