Pendulums, and giving them a nudge 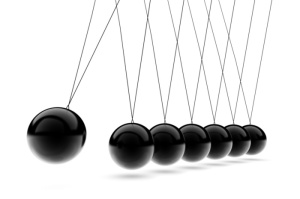 Kansas’ political situation today can practically be described as ‘apocalyptic’.

After the August 7, 2012 primaries (a date that will be burned in my brain forever, I think), the Kansas Senate, long a moderate chamber, is now overwhelmingly (their phrase, not mine) “ultra-conservative”. Several moderate Republicans were defeated in the House, too, but it’s the Senate that was completely dramatic, nearly revolutionary.

And the reverberations will be felt for a long time.

While there are those who describe the outcome of the election as a ‘mandate’ for conservatism, it was mainly the old story of very low turnout in a closed primary, such that a pretty small percentage of Kansans are responsible for the dramatic shift.

And advocates–in healthy care, child welfare, immigrant rights, housing, civil rights, women’s issues, just about everything–are scrambling to figure out what this means, how we cope, and what the fallout will be.

In a discussion with some nonprofit advocates a few weeks ago, the talk turned immediately to the (pretty euphemistically titled) “new landscape”. (The term makes me think of a post-zombie attack New York City or a desolate wasteland.)

One of my colleagues, who has a long career in and around public health and government service, as well as advocacy, referenced Schlesinger’s The Cycles of American History, which is now on my nightstand, although I haven’t made it through it yet.

But the reason for this post is that, while I don’t take issue with the fact that politics swing on a pendulum, and that we can expect that this particular swing to one extreme will temper back down…

I don’t think that we should content ourselves to wait.

I don’t want to just ride the pendulum to the ‘other side’. I want to put it in motion. And I want you to do it with me.

There are precipitating incidents, after all, that start the pendulum shift. And there’s no reason that we can’t be them. Or create them.

My oldest son is pretty fascinated by the Newton’s Cradles and loves to pull back one of the balls to start a chain reaction. That’s why I chose that image for this post. It reminds me of what we need.

There are many things that could provide that momentum, in this time and place.

And probably others that I haven’t even thought of.

Yes, I believe that pendulums swing.

But I also know that they can be pushed.

And that’s what I’m counting on.

This entry was posted in Events and Calls to Action and tagged advocacy, Kansas, politics. Bookmark the permalink.