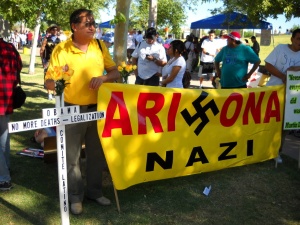 I hate it when really effective messages are off-limits because they’re just so…ethically suspect.

I’m actually not convinced that this particular quandry falls into that category, so I guess what I’m hoping for is some guidance. Because it’s a question that needs to be faced, not just in the immigrant rights community, as I’m dealing with here, but more broadly among social justice advocates at large.

So we acknowledge that the pervasive use of fear as a messaging component, and, indeed, an overarching political strategy is problematic, right? We want social policy that appeals to people’s best ideals and greatest hopes, not their basest anxieties. We know that the former is how we arrive at policy that uplifts and affirms and builds, rather than that which divides and denigrates and destroys. We deplore the use of fear-laden imagery in the policy campaigns that are directed against our communities and those we serve, and which label those individuals as “other”, raising specters of dire consequences if one’s desired policy objectives are not pursued.

When it comes to opposing some of the onerous (and, indeed, odious) legislation aimed at immigrants, we find that using fear as a messaging strategy is, in fact, quite effective. It saves us from having to label as morally “bad” that which absolutely is, and it can sometimes allow us to sidestep the whole, “how do we treat newcomers in our midst” question in the first place, by shifting the focus to our fears about the implications for other sectors of the community.

And we can win.

When we talk about Arizona-style profiling legislation as “show me your papers” proposals that will intrude upon the lives of U.S. citizens, we’re tapping into fears about police states and encroaching authority. When we project that employer sanctions bills will decimate whole industries and lead to economic collapses, we’re relying on latent (and not-so-latent) fears about the precariousness of the current economy.

We’re not lying. Those are real dangers, and real possible impacts. And therein lies the dilemma; if this was a question about truth or not, we wouldn’t have an ethical quandry, just a question about our commitment to integrity in advocacy practice. The dilemma comes from deciding between what we can do and what we should do, and between short-term expediency and long-term shifting of the foundation from which our policies spring.

And, again, this isn’t limited to the immigrant rights arena. What about when we talk about investing in early childhood education as a way to save later costs in incarceration? Or public health as a way to ward off epidemics? Or…fill in the blank for your particular area of emphasis?

Why don’t we, instead, use messages that emphasize our universal humanity, the right of everyone to quality education and adequate health care and economic security?

Because those messages don’t have as much “pop”, quite honestly, as the scary ones. We know from psychological research and the consistent advice of those high-dollar communications consultants that fear sells, and that we are more motivated to act on our fears than on our dreams. And so we rely on those same techniques, and different variants of those same messages, to make our points, even though, when we stop to think about it, we’re a little squeamish about doing precisely what we abhor in the abstract.

So, again, my question is this: Should we focus on energies on shifting the conversation, knowing that if we don’t move away from fear as the conduit, others are unlikely to? Or do we engage in battle on the terms outlined today, because the stakes are just too high not to? Is there a middle ground that’s workable, or how can we make peace with where we think we must be? How do you use fear, and how do you respond to it, and how do you live with it? Does it make a difference, the question of what we’re teaching people to fear? Are there “good” and “bad” fear-based messages and, if so, how can we be sure that we’re only crafting the former?

How do we move people towards the world as it should be, without becoming entangled in the pervasive fears that inhabit this one?

This entry was posted in Analysis and Commentary and tagged ethics, framing, immigrant rights, policy. Bookmark the permalink.