What the new poverty data say about an old problem 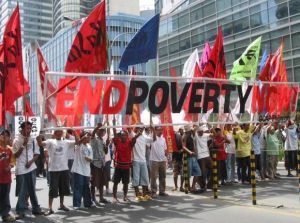 I’ve spent the last few weeks buried in the U.S. Census Bureau’s new website, trying not to be paralyzed by the fact that the poverty statistics represent, of course, actual people who are poor.

A lot of them.

There isn’t anything truly surprising in the new data; poverty has gotten worse–dramatically so, in some cases–with people of color and children, particularly those in single female-headed households, especially vulnerable.

So, for me, reviewing these figures is not so much about gaining new insights, but about seizing an opportunity to focus our attention, once more, where it belongs–on how terribly our public policies are failing to effectively combat the scourge of poverty.

Because we’re failing not in explicable or unpredictable ways; we’re failing with tragic routine, reflecting much more a failing of political will than of technical ability.

And our failure is increasingly dangerous, as the numbers of people in poverty grow, and as we learn more about the lifelong effects of being poor.

Here’s what we know about poverty in my state in 2011. Now, what should we do about it?

We shouldn’t need new statistics to remind us that poverty is a dire and growing threat to community and individual well-being. We don’t need statistics to connect the dots about those we see living in homelessness, or our own coworkers’ concerns about their mortgage payments, or, even, our own fears about the precarious nature of our employment.

But we can, and, indeed, we must, use the release of these new data on poverty and its shadow–the economic insecurity that is nearly ubiquitous in today’s economy–to dedicate ourselves anew to developing public policy structures and investments that harness our considerable powers to improve people’s lives, individually and in the aggregate.

Because when the next set of poverty data is released, I want some surprises.

This entry was posted in Analysis and Commentary and tagged Kansas, poverty, research. Bookmark the permalink.