My mother was right 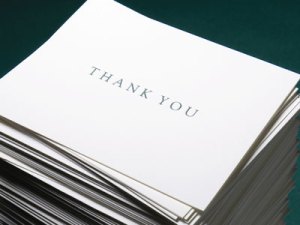 My husband thinks it’s bizarre that I still send thank-you notes to my parents and to his, when they give a present to the kids.

We buy them in bulk, to have on hand just in case.

It hadn’t occurred to me, until I was reading Fundraising for Social Change, the extent to which these lessons in gratitude have permeated my advocacy work.

But they have; I say thank-you to elected officials all the time.

I thank losing candidates for having run good races, especially if they have raised issues that would have otherwise been overlooked. I thank my own members of Congress and state legislators for their votes on a variety of issues I support. I thank elected officials and non-elected leaders for their statements in the press, their willingness to attend certain events, and their attention to pressing problems.
And, you know, now that I think about it, they have an even higher rate than my own Mom of thanking me for the thanks. I received a very heartfelt thank you for my thank you from my member of the U.S. House after his vote in favor of health care reform, and from my state senator after she supported the Kansas revenue increase. In the latter case, she said that I was the only constituent to have thanked her for that vote. Just last week, I got a thank-you note back from a state senator (not my own) thanking me for my thank-you note for his vote against the instate tuition repeal (and, no, he’s not even related to my mother!).

I can think of several instances where my thank you resulted, later, in a stronger relationship with an elected official, an entry point on a subsequent issue, or even a slightly healed breach where there had been conflict. Especially for those who are not my own representatives, sometimes these “thank you” relationships are the start of much deeper communication and an ability to work together on issues important to me.

People, whoever they are, really do like to be thanked, especially when they’re so used to be asked, or even harassed, instead. So, in honor of my mother and her lifetime commitment to thankfulness, here are some tips for thanking policymakers in an advocacy context, with an eye towards how today’s “thank you” just might help with tomorrow’s “would you please?”

This entry was posted in Tips and How-Tos and tagged elected officials, fundraising, lobbying. Bookmark the permalink.