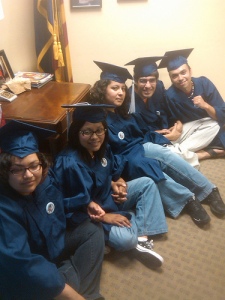 Yes, I’ve been yelled at, cursed at, even kicked out of church once. I’ve gotten a few threatening letters, a couple of nasty phone calls.

But I’ve never stood far enough afield of “respectable” comportment, even in opposition to laws that I find indefensibly unjust, to warrant arrest.

Which makes me think…have I been doing something wrong?

For the past year or so, there has been a tension simmering in the immigrant rights movement, one known to most other great, worthy causes that inspire social movements around them, between prudence and passion, strategy and sacrifice, “staying at the table” v. “heightening the contradictions”.

And here, as so often throughout history, those tensions have played out along the lines of established, funded, well-respected organizations v. young people demanding social justice on their terms and on their timelines, willing to use their own lives as the fodder for the change they seek.

I’ve straddled both sides of this divide, to an extent, advising the DREAM Act youth who are staging sit-ins (and being arrested for them) as well as working to support the call-in campaigns and legislative strategies of the immigrant rights organizations. I’ve made contributions for bail funds for DREAMers in jail, and, last fall, I talked with chiefs of staff about prospects for bringing a stand-alone bill to the floor.

And what I see is that, while the mainstream organizations aren’t wrong (the young people are doing risky things for which they may pay a tremendous price, and there’s no guarantee that it will have any result (as we saw, in fact, when DREAM failed in the Senate, and many of those students are now likely to be deported), and it does make people in power really uncomfortable and, at least temporarily, less willing to negotiate), they’re a little bit missing the point, at least at first, when there was a lot of whispering about the wisdom of the insider approach as contrasted to the renegade actions.

In the first place, the students point out (echoing what Student Nonviolent Coordinating Committee members had to remind the Southern Christian Leadership Conference adults in the 1960s), the closed-door negotiating sessions, with much reasonableness on both sides, aren’t exactly yielding the gains we know we deserve, so (as youth tend to argue), what have we got to lose?

As adults on the sidelines, we get worried (because these kids may get deported, and some of them have families, and how will they finish school?), and kind of skittish (because now we have to answer, not just to the haters who opposed us from the beginning, but also to those sympathetic to our cause as long as it’s not too loud or too combative). So did the African-American parents whose six-year-olds went to jail in Birmingham, Alabama in 1963.

Social change is often really scary, especially for those who have to forge it. We get nervous when people are honest about their anger, especially if they don’t direct it at the targets we choose or express in the way we’d like.

But the truth is:

in the search for justice, patience isn’t necessarily a virtue.

In the Letter from a Birmingham Jail, Dr. Martin Luther King, sounding much like the SNCC students whose side he often took in battles between the youth and the elders, reminds that “time is neutral”, that waiting never produces inevitable progress, and that “the time is always ripe to do what is right”.

Even if the Senate Majority Leader disagrees.

Today, the courageous immigrant students whose tenacity and moral witness are almost single-handedly keeping immigrant rights on the national agenda are teaching us new and needed lessons about the power of direct action, the meaning of civil disobedience, and the promise of unity. And I think that those who make their living, as I used to, from advocating alongside and on behalf of immigrant communities, are being challenged and stretched in wonderfully exciting ways, and, in many cases, are rising to those challenges, albeit with some reservations, out of acknowledgement and admiration for the movement youth are creating.

On February 1, 1960, four college students, steeped in nonviolence but not closely associated with any civil rights organization, decided, almost on a whim, to sit in at the Greensboro, North Carolina Woolworth’s lunch counter.

They didn’t issue a press release, or prepare talking points, or form a coalition.

They just sat, and refused to move.

And now that lunch counter sits in the Smithsonian and the student movement their silent action sparked helped to right centuries-old wrongs.

And that’s part of what makes me a bit ashamed to have never seen the inside of a jail cell.

Where do you stand on the “inside v. outside game” divide? What are you willing to sacrifice for the causes in which you believe? How has that changed as you’ve aged? How can adults support youth movements, without co-opting or patronizing or pressuring them? And why does figuring out how to build movements with a place for more radical action matter, to our quest for justice?