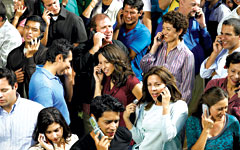 Of all of the essays from Rebooting America that captured my attention, it was probably the one from Beth Simone Noveck, about completely envisioning a new style of citizen participation in governance and decision-making, that most captured my imagination.

She starts with an acknowledgement of a lament close to my own heart, that deliberative conversations seldom connect to action, which can mean that they’re even worse than non-participation, because they give people the feeling of having a stake, when they really do not. She calls them “one-off affairs, not tied to governmental practices of agenda-setting, policy-drafting and decision-making.”

But we know that officials don’t need to be sole decision makers, that, in fact, we’d come up with better policy solutions, and better paths to implementation, if more voices were included, in meaningful ways, in that process.

And that’s when Noveck’s essay gets really interesting. She lays out a practical framework for micro-participation, of sorts, that would allow the public, writ large, real involvement in government decisions, in such a commonsense, pragmatic way that it’s really hard to find much objection.

Don’t think about other experiences in “participation” that you may have had–she’s not thinking roundtables with colored dots, or advisory councils galore. She points out that we don’t need large numbers of people to work on issues and that, in reality, relatively few government officials make many very important policy decisions today. And she’s not talking about some high-tech public comment or voting system on every piece of legislation, either. At least to begin, she focuses on regulatory action as policymaking, and envisions a mechanism of crowdsourcing in which a few dozen experts and enthusiasts would handle these regulatory issues by providing their consultation in the ‘action stage’ of governing.

There’s certainly no reason to think that these lay experts couldn’t craft regulatory policy as well as the current bureaucrats do, and involving the 5 or 10 or 100 people who know best, a percentage of whom will want to contribute to solving community problems, would not be an insurmountable technical or logistical challenge, either, especially in light of today’s technology.

She makes a compelling case, too, that such a system would be no more prone to corruption than current practice, and that the openness and transparency that would come more naturally to such a participatory model would, most likely, serve as a deterrent to corruption.

I love this idea.

I’ve met dozens of social work students and practitioners whose passion is something relatively obscure–rules about when foster care providers can also serve as foster families, for example, or restrictions on voting rights for those with mental illness, or reimbursable services for Medicaid recipients struggling with post-partum mood disorders.

I WANT these individuals engaged in policymaking, directly, on these topics. They know them, and they care about them, and they would do a better job than I would, or than an elected official balancing hundreds of different policy issues, none of which dovetail very well with the above.

But even more importantly than the substantive policies that could emanate from such a system are the skills and competencies that participants in such a crowd would develop, skills that would enable them to not only advocate more effectively in disparate topics, but also to leverage their voices and relationships in the legislative policy realm, too.

I agree with Noveck that it’s time to move participation beyond talking. Our government would be better off, and so would our citizenry. If you’re intrigued, check out the Democracy Design Workshop, a “do tank” oriented around projects that seek to build such tools. There’s an awesome e-rulemaking interface to improve public participation in federal regulatory policymaking, a policy wiki for collaborative legislative drafting, and ‘clickable statutes’, which creates interactive diagrams to help lay people better understand legislation.

Government by the people…maybe it really is possible?

This entry was posted in My New Favorite Thing and tagged advocacy, deliberative democracy, regulatory policy, technology. Bookmark the permalink.