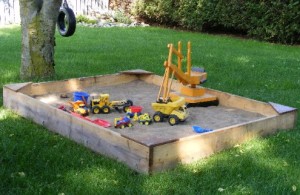 One day last fall, I overheard my four-year-old lecturing another child on the idea of the public commons.

This other little boy tried to grab a truck away from Sam in the sandbox in our neighborhood park. “Mine!” he said.

Sam looked a little baffled, glanced briefly at me, and replied, “It’s not yours. And it’s not mine. It’s just…everyone’s.” (The trucks are mostly left there by families that use the park, although a few are purchased by the city for park use.)

I think that the little boy started crying, because he just wanted the truck, but maybe I’ll imagine a different ending to the story today, one that involves communal understandings of property, and shared stewardship, and exaltation of the “we” above the “I”.

One of the sites I’ve been spending some time on lately is On the Commons, described as “a citizens’ network that highlights the importance of the commons in our lives, and promotes innovative commons-based solutions to create a brighter future.”

There’s a lot of environmentally-related content, as you might imagine: our communal resources such as water, alternative energies, and green space. But there’s also material related to using wealth in ways that promote the common good, (three cheers for responsible tax policies!), discussions about the Internet as a public good rather than a corporate tool, and the forum organizing project, dedicated to talking together about our common spaces, physical and not, and how to not just preserve but enrich and enlarge them.

I think about the public commons a lot more since I had kids, and not just because we spend a lot of time in that sandbox.

It’s because our common resources, and, more importantly, the mentality to value and share them, are a big part of what we leave to our children, and far more secure than private inheritances we might hope to leave.

And I’m not sure what kind of public commons we’ll have left by the time they’re engaged in debates over how to protect them, or whether the concept will even have real meaning by then. Even today, there are parents who seem confused, on their first visit to the park, that someone has left toys there for the community to use. And others who avoid the public park altogether, because they don’t like the unpredictability that comes with sharing an unmediated public space.

But I believe very strongly in things public: public schools and public places and public utilities.

I believe in them not just for what they provide, but for how they change how we think, about who belongs within the “we”, and where the limits of our personal ownership are drawn.

And I want my kids to have those experiences, including the inevitable tussles when private desires clash with public good. I want them to be people comfortable with commons living, people who prefer public spaces.

And, so, I’ll be On the Commons quite a bit, alongside my fellow citizens, around the world, who believe in public, too.

This entry was posted in My New Favorite Thing and tagged community, family, social justice. Bookmark the permalink.