The Power of Half 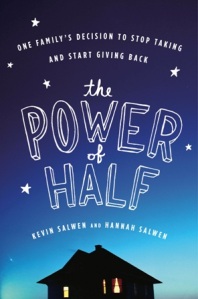 Note: If you like free stuff, you’ll want to make sure to read all the way to the bottom of this post! If, you know, you’re into that kind of thing.

Last Thursday, I attended the kick-off campaign event for the United Way of Wyandotte County (you can take the girl out of the ‘Dotte’, but, you know…). The keynote speaker was the author of The Power of Half.

It is really quite an inspiring book; the core message of the authors (Kevin, the father, who I heard speak last week, and his teenage daughter, who was really the impetus for the family’s decision to sell their extravagant house and give half the proceeds to fight poverty and hunger, which is obviously the theme of the book) is that we all can and should be doing more to create a just society for others, and I found quite a bit that relates to my own life.

There are two pieces I found lacking, and I’ll get to those at the end, but, first, what I really like:

This entry was posted in Inspiration and Examples and tagged family, philanthropy, reviews. Bookmark the permalink.