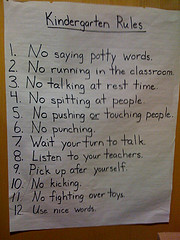 So it has been established that I’m kind of militant about getting nonprofit 501(c)3 organizations to do advocacy, right? I’ve spent a lot of time talking with nonprofit leaders about the IRS rules around advocacy limits, their considerable options within those rules, and resources to help them navigate them. And, more recently, I’ve been talking with a lot of nonprofits about social media and its potential for their social change work.

Which has got me thinking about all of the unanswered questions regarding social media and nonprofit advocacy. Questions that really need to be addressed before some pioneering organization takes a risk and ends up in trouble with the IRS, which, in turn, becomes this inflated legend used as a rationale (excuse?) for many other nonprofits to shun advocacy as “too risky” or even “unlawful”.

To be sure, much of the social media/advocacy nexus falls under the rubric of online advocacy, which the Internal Revenue Service and related court decisions have already substantially addressed. But there are some areas that I view as unique and that, as of yet, I have been unable to find sufficient guidance on. If anyone is an attorney with good advice on how to interpret these areas (Alliance for Justice folks, are you reading this?) or has found a good guide that I’ve somehow missed, please share. And if you have other questions related to social media and advocacy rules, leave those in the comments, too, and I’ll do my best to track down some answers.

This entry was posted in Analysis and Commentary and tagged advocacy, nonprofit organizations, technology. Bookmark the permalink.